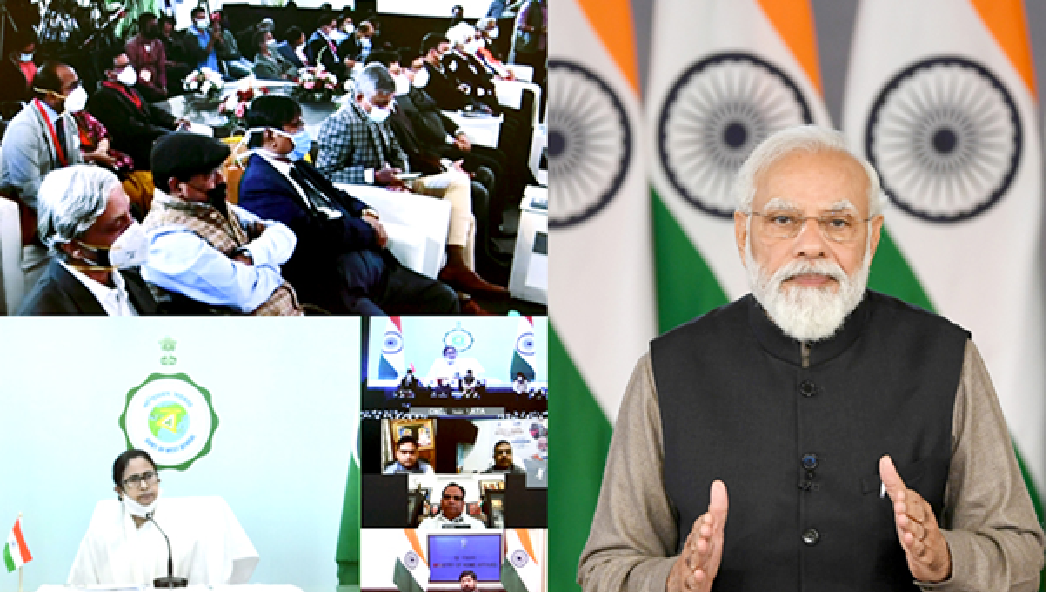 Addressing the gathering, the Prime Minister said That the new campus will go a long way in providing affordable and state of the art care to the people of West Bengal especially to the poor and middle-class families. “In the journey of the pledge to make best medical care available to each and every citizen of the country, we have taken another strong step”, said the Prime Minister.

The Prime Minister mentioned that the country started the year with vaccination for children in the age group of 15 to 18 years. At the same time, India is also achieving the historic milestone of 150 crore – 1.5 billion vaccine doses, in the first week of the first month of the year itself. 150 crore doses in less than one year is a significant achievement and symbol of the will power of the country. It denotes the country’s new confidence, Aatmnirbharta and pride, he said.  As cases are rising due to the omicron variant, this shield of 150 crore vaccines doses becomes all the more important, the Prime Minister said.

The Prime Minister noted that today, more than 90 percent of India’s adult population has received a single dose of the vaccine. Within just 5 days, more than 1.5 crore children have also been given the dose of the vaccine. He dedicated this achievement to the whole country and every government. He especially thanked the scientists of the country, the vaccine manufacturers and the people in the health sector for this achievement.

The Prime Minister remarked on the fear that cancer causes in the poor and middle class due to the financial implications. To get the poor out of the vicious circle that the disease causes, the country is taking continuous steps for cheap and accessible treatment. The prices of medicines needed for the treatment of cancer have come down significantly in the last few years, he said. More than 8 thousand Jan Aushadhi Kendras are providing medicines and surgical at very affordable rates. More than 50 cancer drugs are available at much lower cost in these stores.

The Prime Minister said today Ayushman Bharat scheme is becoming a global benchmark in terms of affordable and inclusive healthcare. Under PM-JAY, more than 2 crore 60 lakh patients have received free treatment in hospitals across the country. Estimates say that in the absence of the scheme, patients would have ended up spending 50 to 60 thousand crore rupees. More than 17 lakh cancer patients also benefited under Ayushman Bharat scheme. The scheme is also promoting early detection and early treatment of the serious diseases through regular screening of diseases like cancer, diabetes and hyper-tension. Health and wellness centres that are coming up are helping in this campaign. More than 5 thousand such centres have been created in West Bengal also. More than 15 crore people have been screened for oral, cervical and breast cancer in the country, the Prime Minister informed.

The Prime Minister said that till the year 2014, the number of undergraduate and postgraduate medical seats in the country was around 90,000. In the last 7 years, 60,000 new seats have been added to them. In 2014, we used to have only 6 AIIMS and today the country is moving towards a strong network of 22 AIIMS. Work is going on to ensure at least one medical college in every district of India. Cancer care infrastructure will get a boost by 19 state cancer institutes, 20 tertiary care cancer institutes have been sanctioned and work is on for more than 30 institutes. Similarly, Ayushman Bharat Digital Health Mission and Ayushman Bharat Infrastructure Mission will give the country’s health sector a modern form, he added.

The Prime Minister concluded by reiterating his appeal to take every precaution in the fight against Corona.

The second campus of CNCI has been built in line with the Prime Minister’s vision to expand and upgrade the health facilities in all parts of the country. CNCI was facing a heavy load of cancer patients and a need for expansion was being felt for some time. This need will be fulfilled through the second campus.

The second campus of CNCI has been built at a cost of over Rs 540 crore, out of which around Rs 400 crores have been provided by the Union government and rest by the West Bengal government, in the ratio of 75:25. The campus is a 460 bedded comprehensive cancer centre unit with cutting edge infrastructure for cancer diagnosis, staging, treatment and care. The campus is equipped with modern facilities like Nuclear Medicine (PET), 3.0 Tesla MRI, 128 slice CT scanner, Radionuclide therapy unit, endoscopy suite, modern brachytherapy units etc. The campus will also work as an advanced cancer research facility and will provide comprehensive care to cancer patients especially those from Eastern and North-Eastern parts of the country.